Buffalo, Not Simply an Animal 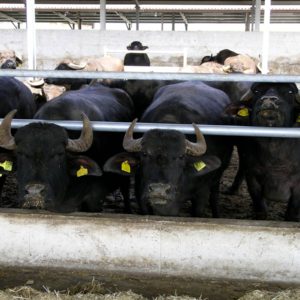 The bell-buffalo properly named “Italian Mediterranean breed” is not simply an animal; It today represents the image of a territory and a product known all over the world for its goodness and genuineness.
This animal is really extraordinary: it is long and strong (weighs on average 7 quintals), at the same time calm and intelligent. It has a gestation period of about 10 months and a lactation of 270 days.

The Agrizoo breeding, which has about 600 buffaloes, is located in the heart of the Mozzarella di  Bufala DOP’s origin area, in an area that has always been called Felix. It is no coincidence that the company is about a handful of miles from the Borbonico Site of Carditello, where King Charles III and his son Ferdinand of Bourbon went for hunting; In this structure there were stables for breeding buffalo and rooms for the production of mozzarella and cheese.

The history of the Old Democracy begins with these campaigns, is a matter of natural settlement, indissoluble with the past.